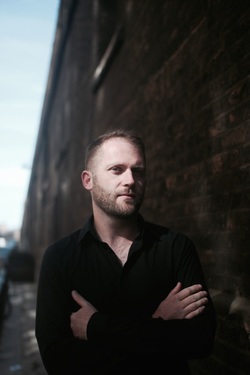 David Wallace was born in 1982 in Kilkenny in the south east of Ireland. He began his music studies on the violin and piano in the school of music there. At the age of 10 he arranged the theme from Wagner’s’ Rienzi Overture for string ensemble and percussion. Thus began a lifelong fascination with the art of orchestration and composition. Soon after this he began to compose original music for small ensemble and had some works performed in the school of music summer concerts. During his undergraduate, which he undertook at the Cork School of Music, David studied the violin with Cornelia Zanidache, harp with Bonnie Shaljean and composition with Dr. Rhona Clarke and Séamas de Barra. While at the Cork School of Music he performed with the CSM Symphony (harp,violin), Baroque Ensemble(violin,harp) and Wind Ensemble(harp,percussion). He studied conducting with Alan Cutts and Geoffrey Spratt.

Having achieved a 1st class honors he was accepted onto the MMus in composition course at the Guildhall School of Music and Drama in London studying with Richard Baker and Julian Philips, from which he graduated, with distinction in his portfolio, in September 2006. He has an LRSM in violin performance and a PGDip in Dance Studies from Roehampton University.

While at the Guildhall David won the Tracey Chadwell Memorial prize. He was Composition Fellow at the Guildhall for the academic year 2006/07. David was Hochtief Fellow in Composition in the Cork School of Music from 2006 to 2008 where he also lectured in Composition and Orchestration part-time. During 2010 he was appointed the schools first Aloys Fleischmann Composer in Residence. In 2013 his opera Dancing in the Dark (Lucy) won a Director's Choice Award at the International Contempo Festival in Boston and his song cycle Songs from the Rolling Deep won a BMO merit award. In 2015 he was appointed an Ambassador for the IAYO 20th Anniversary Celebrations.

His music has been performed by both national and international artists in Europe, America and Asia, most recently the RTÉ Vanbrugh Quartet, Gary Curtin, The Syrius Piano Trio, The Amarilli Trio, The Contrasts Trio, Keith Pascoe, Heather Roche, Louisa Dennehy, Timothy Sun, Norah King, Rebecca Van Den Berg, Bojana Dimkovic, Jean Kelly, Cork Symphony Orchestra, Macao Youth Wind Band and Ciara Moroney, in such venues as Liverpool Philharmonic Hall, GSMD Music Hall, Cultural Centre Macau, Hong Kong Arts Centre, Waikato University New Zealand,  Ground Zero New York, The Place and many venues in Ireland (NCH, Castalia Hall, CSM Curtis) and throughout London and as part of festivals such as City of London Festival (2006), Irish Heritage (2011), Irish Performing Arts Festival (2012) and Hell Hot! (2009) in Hong Kong. He has assisted on the score for the English National Ballet production of The Snow Queen, which had its premiere on the West End in 2008. Past premieres (Sept 2015-June 2016) included Vexations, Hexad and Mosey, Tootle, Pootle for Clapham Chamber Concerts,  the puppet opera The Cock and the Fox for Ensemble Collective, as well as Lucy (2014), The Judgement of Paris (2013), 2012 saw the European premiere of In Deepest Night (CSM Concert Band), Impressions of Light (Capella Lyrica) and Introduction and Capriccio Brilliante (Gary Curtin), "Silver Apples of My Childhood", "Across The Water"  A Multi Media Song Cycle/Opera with words by Dan Milmo, Hexad (London, string orchestra version - Jan '17),  a new piece for Clarinet, Cello and Piano "Venus Under Moon" (CCC, Feb '17), Morceaux (Hong Kong, Feb'17), a piece for symphony orchestra for St. Paul's Sinfonia (London, March '17) and From My Window I Can Hear The Sea (CCC, Apr '17). 2020/21 premieres include the Cello Concerto and the opera The Signalman. He continues his work as Composer in Residence for the Clapham Chamber Concerts series 2020/21.

His academic interests extend to the area of interdisciplinary research with particular interest in the relationships between music and dance. He has given papers at Roehampton University, Durham University, Dance Research Forum Ireland and SMI conferences. He has had papers and chapters published in Etudes Irlandaisse, a book on the founder of Irish National Ballet: Joan Denise Moriarty - Ireland's First Lady of Dance and a number of articles in Dance International Magazine on the same subject. He teaches violin/viola and is Head of Instrumental Music and Performances at Walthamstow Hall School and works as a violinist with his quartet The Aralt Quartet and other freelance performing. He has been appointed to the ABRSM board of examiners.